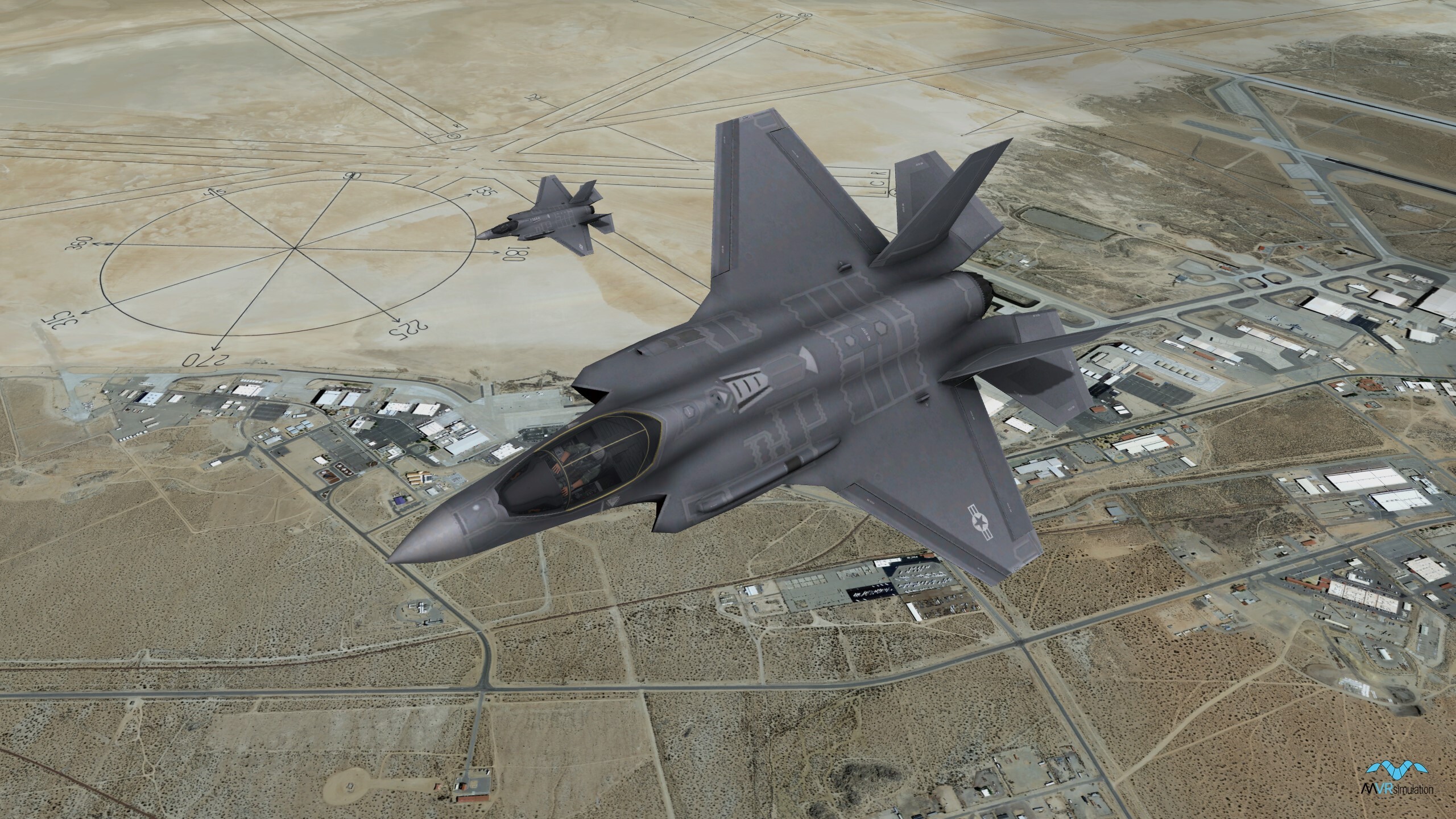 For over a decade, MVRsimulation VRSG has been used in simulators at the USAF Test Pilot School (TPS) at Edwards Air Force Base, California, which prepares student pilots to fly the next generation of fighter aircraft. At the TPS, students train on the Avionics Familiarization Simulators, developed by ZedaSoft, which are designed to teach current and advanced avionics concepts, including the current sensor capabilities of fourth and fifth generation aircraft.

The simulator is configured with four VRSG channels, each running on a small form-factor 1U rackmount computer. The VRSG channels provide out-the-window view, radar ground map, and EO sensor simulation. The left channel generates EO or IR imagery concurrent with the out-the-window imagery and digitally transmits the imagery over the network to the multi-function display (MFD). The top channel generates VRSG Radar imagery concurrent with generating the out-the-window imagery. All channels are fully correlated to the Edwards AFB terrain and cultural database area. 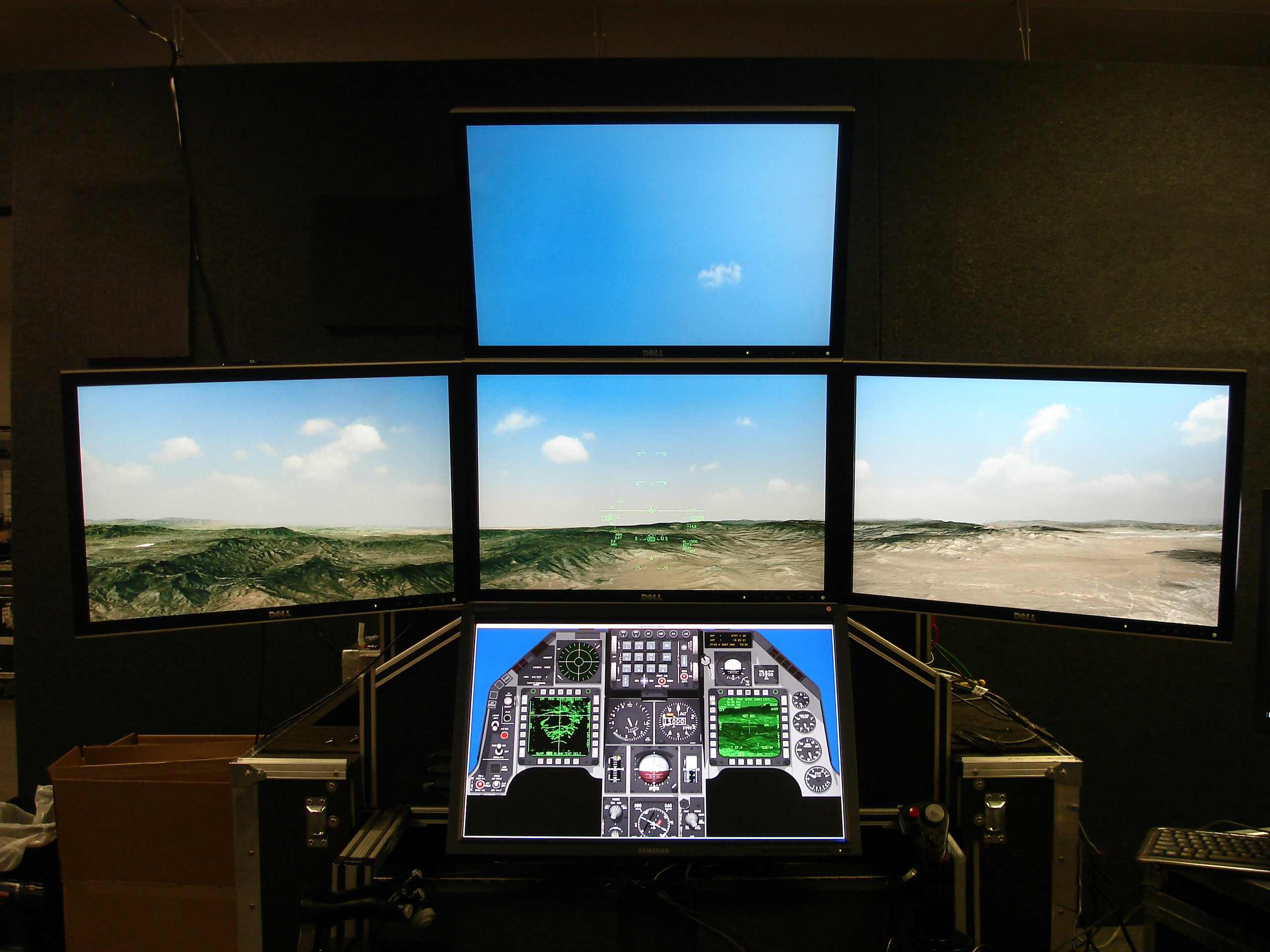 Avionics Familiarization Simulator at the USAF Test Pilot School at Edwards AFB, with VRSG out-the-window views and the sensor and radar views in the multi-function displays.

The Avionics Familiarization simulator is based on ZedaSoft’s patented Container Based Architecture (CBA), which enables TPS student pilots to observe the avionics capabilities of different generations of aircraft by instantaneously switching from one aircraft type to another in the same scenario. Such observations are valuable for learning workload management techniques. The simulator includes a 24" touch-screen virtual instrument display, hands-on-controls, four 24" monitors for out-the-window viewing, a sensor channel, and all necessary computers housed in a single rolling case.

This symbology is rendered directly in the VRSG channels. The HMD symbology is oriented using the Intersense IS-900 head-tracking system, which is mounted on the student’s headset.

The F-16 radar supports field-of-view modes that let it zoom in on an area and provide a refined image. The NORM mode display is an angular sweep that one typically associates with radar, as shown on the left in the image directly above. The other modes zoom in on a patch of ground that's much smaller than the coverage shown by NORM mode. Similarly the targeting pod (shown on the right in both cockpit images) supports three field-of-view options.

MVRsimulation worked with ZedaSoft to put together a flexible system for plugin configuration. This system runs the targeting pod's IR in an off-screen window on the left out-the-window channel, and runs the radar simulation on the top center channel along with the out-the-window channel. ZedaSoft also implemented graphic overlays, which were integrated with VRSG in plug-in form. The graphic plugins include a HUD in the center channel, an emulated HMD in all four channels, and a variation of NASA's Highway-In-The-Sky (HITS) in all four channels.

This simulation system gives student pilots the opportunity to simulate their exact EO flight mission in advance of flying the mission in the actual aircraft.

The US Air Force does not endorse MVRsimulation, ZedaSoft, or their product lines.