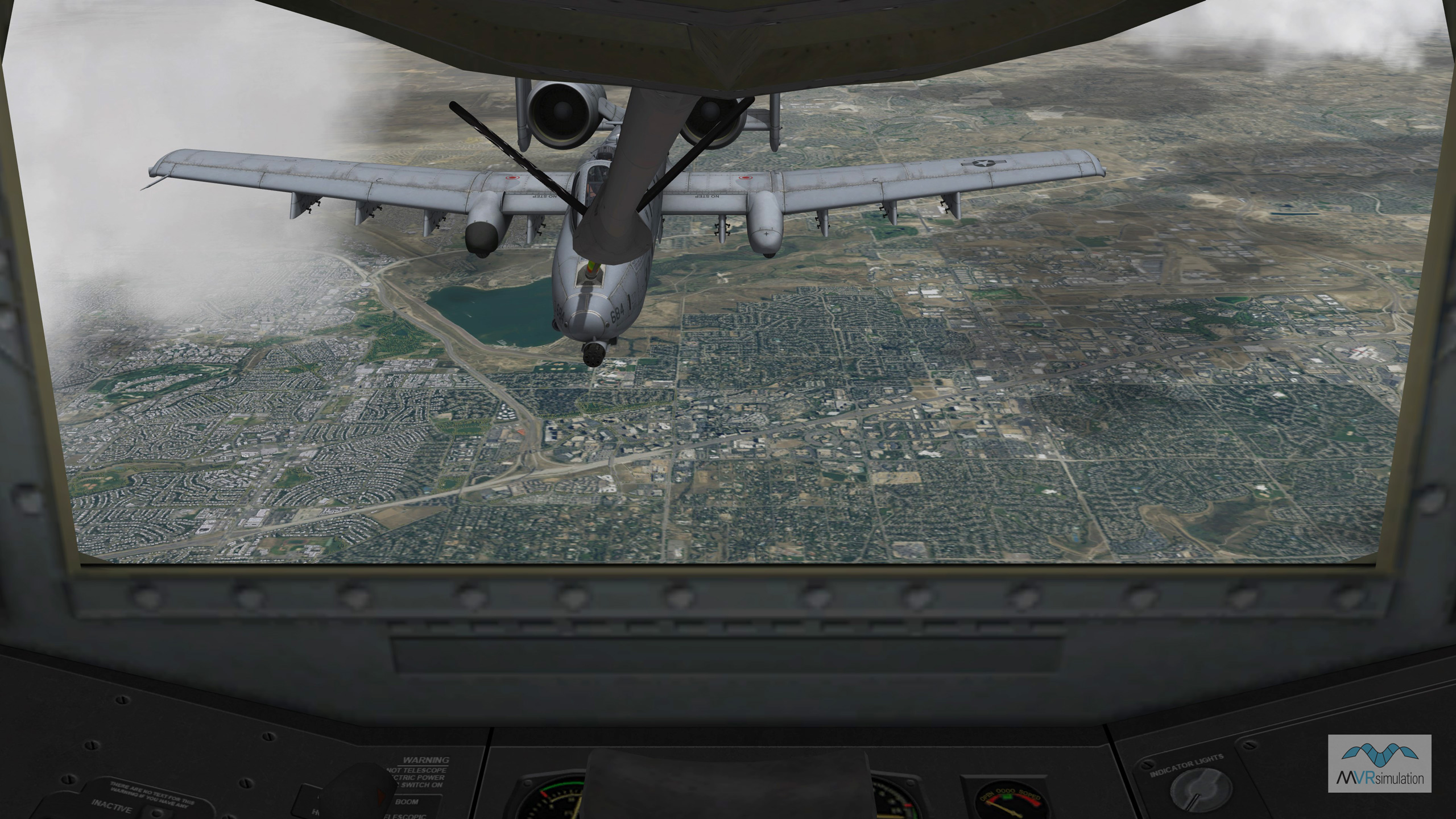 MVRsimulation VRSG real-time scene of a simulated KC-135R aircraft refueling an A-10C over the Denver, CO, area of virtual CONUS++ terrain.This scene also features volumetric clouds which cast shadows onto the terrain and culture below. Refueling-specific features of VRSG include support for up to 4 shadowable light sources.

To minimize perceived aliasing, VRSG multi-samples each shadow map, using a per-pixel-unique randomly oriented sampling kernel resulting in softened and anti-aliased shadow boundaries.  With generating the varying resolution shadow maps, VRSG can use the highest resolution shadow map for the highest contrast light source, which is the light source most likely to cause aliasing artifacts.

During day operations when local light sources are not utilized, VRSG allocates more computing resources to the production of the sun shadow, as the sun shadow is of higher contrast and requires more anti-aliasing to achieve a quality result.  During night operations, VRSG can reallocate these resources among multiple lower-contrast shadow casting light sources. Lower contrast light sources can use lower resolution shadow maps for better performance. 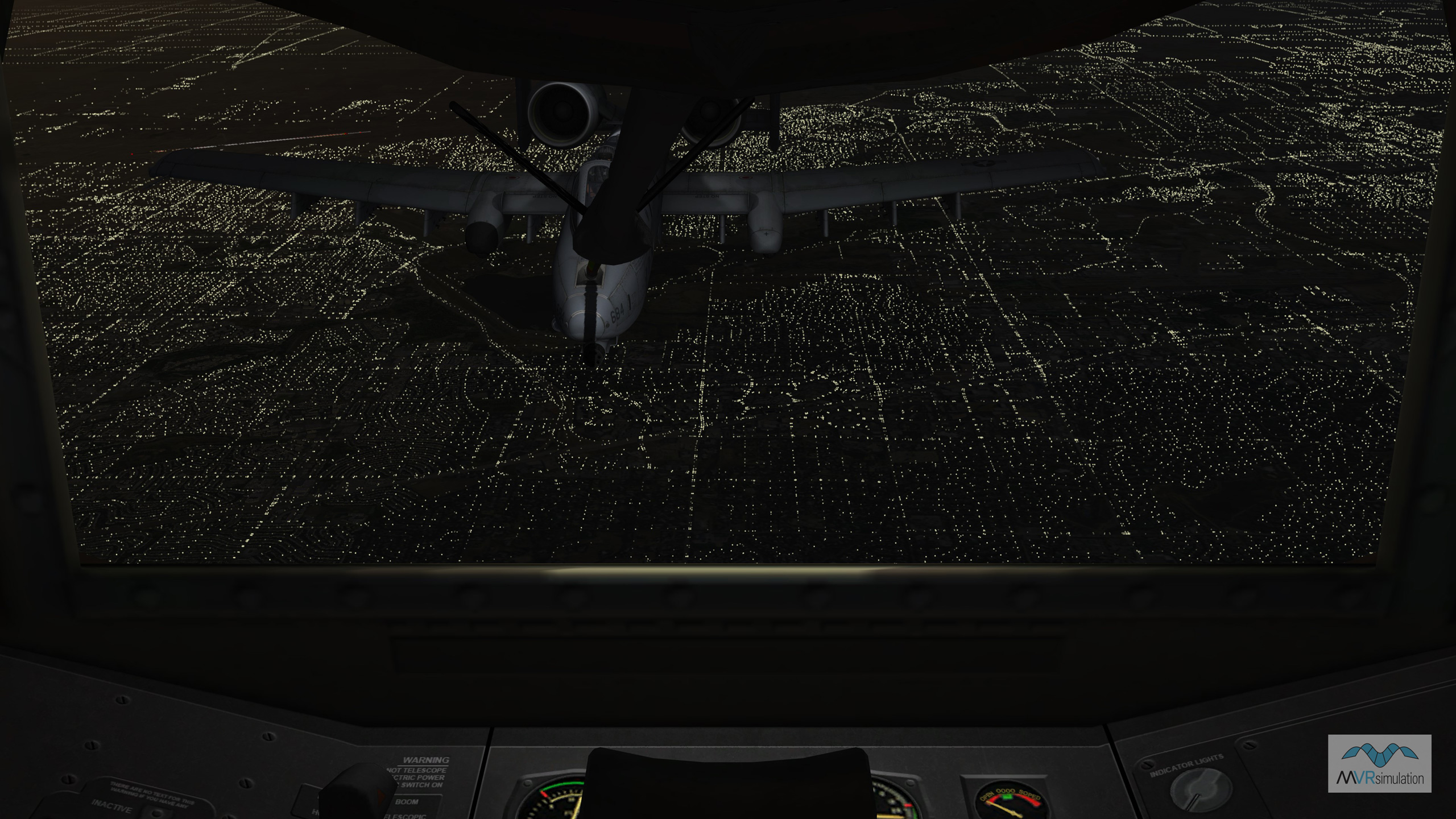 MVRsimulation VRSG real-time scene of the simulated boom operator view of a simulated KC-135R aircraft refueling an A-10C during night operations over the Denver, CO, area of virtual CONUS++ terrain. The scene features the shadows cast by the KC-135R's tail-mounted flood light illuminating the A-10C, and the cultural lights of Denver.

Unlike other systems that require a finite number of discrete illumination levels baked into a switch node of a model, VRSG's addressable light maps offer a full continuum of intensity control.

VRSG also supports pilot hand-signals and other human animations. These animations can be modeled as articulated parts or with VRSG's BVH-based skinned-mesh character rendering engine. 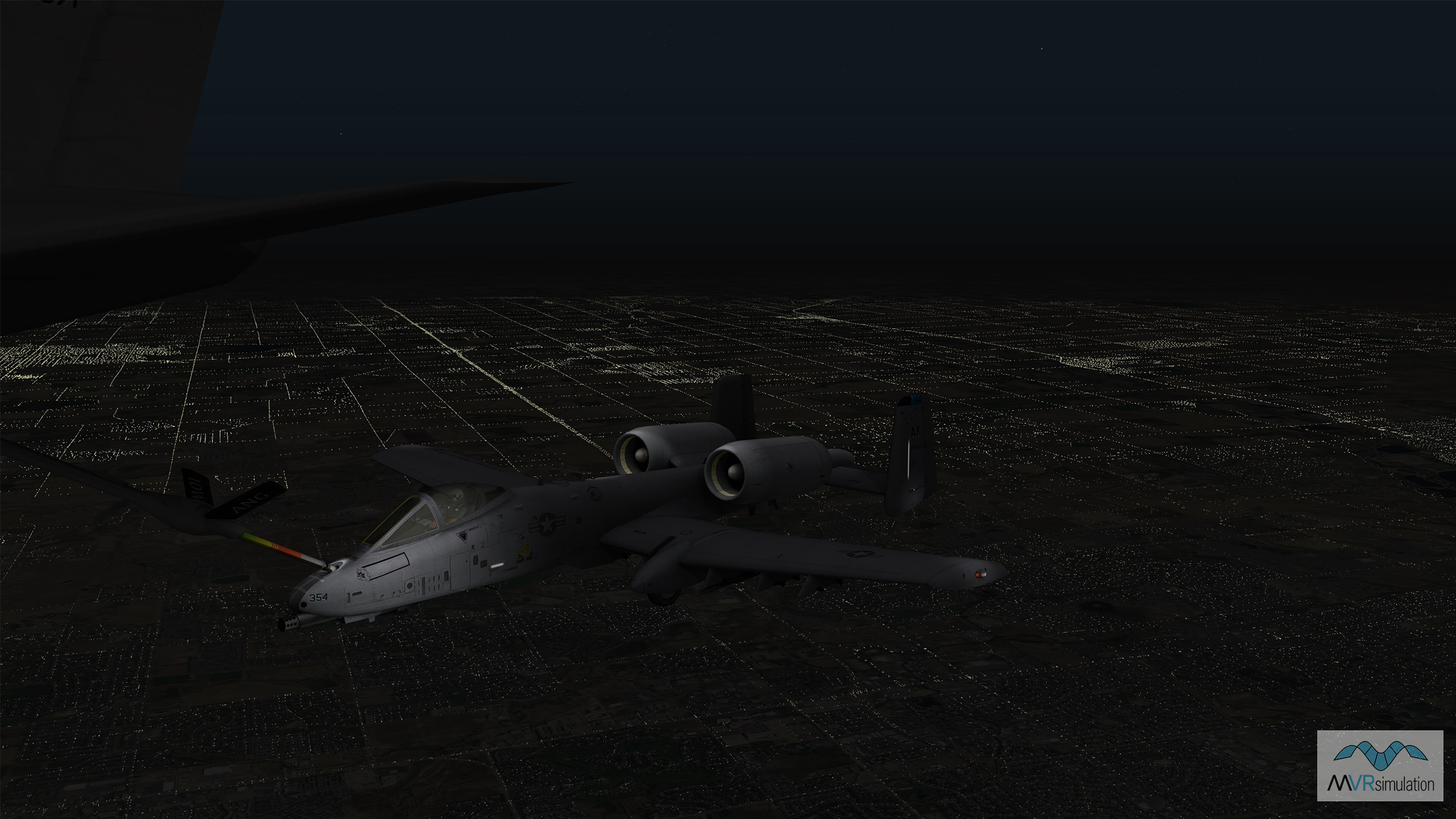 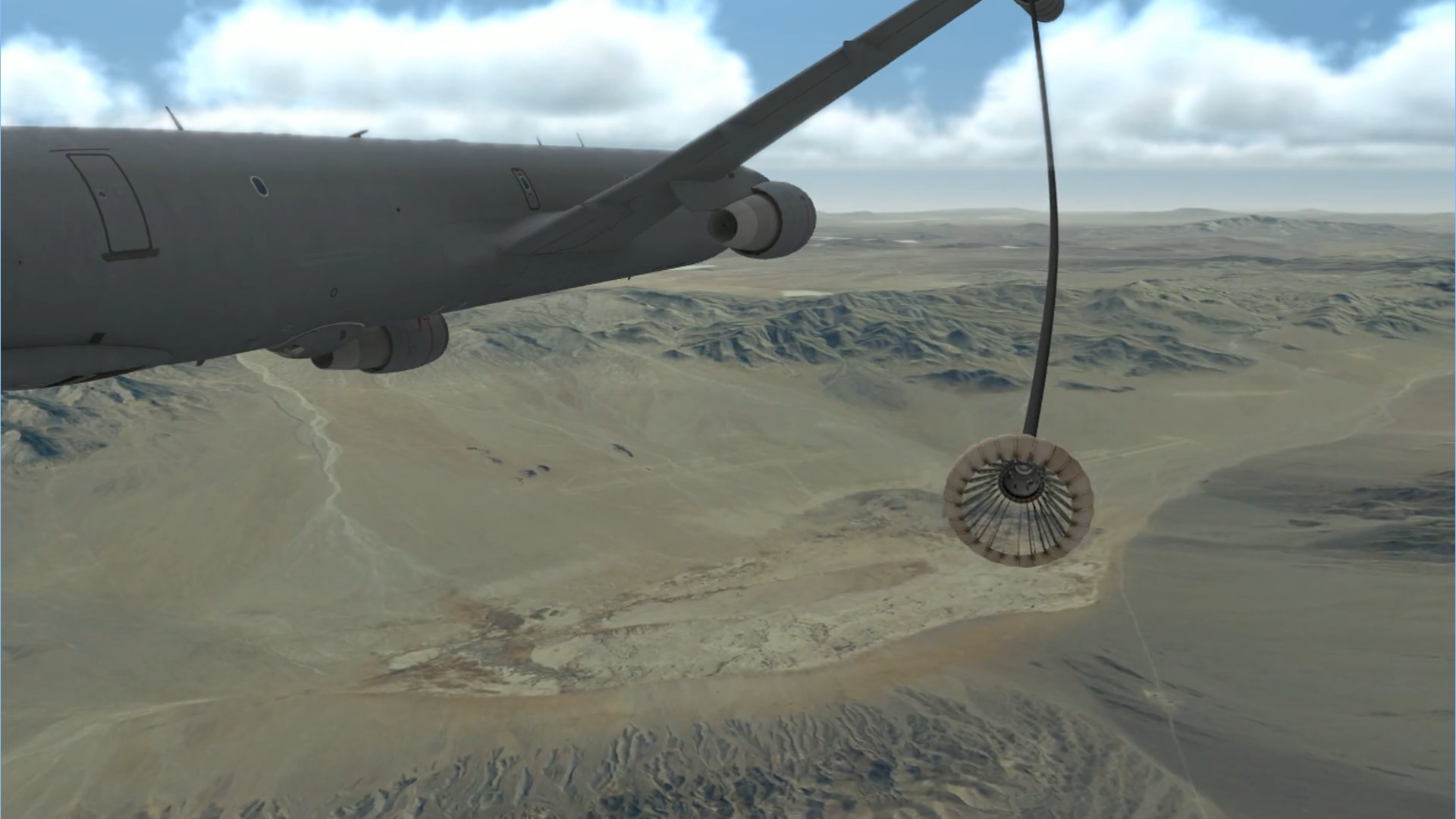 The above video illustrates what is possible with developing custom plugins for VRSG. In this example, a VRSG plugin is used to model the physics of a refueling drogue hose, creating and rendering custom geometry for the hose. The receptacle is a 3D model, which the plugin instructs VRSG to position and orient at the proper place, given the modeled state of the hose. The plugin need not model the receptacle geometry, only the hose itself. This sample plugin is provided with source code to VRSG developers, from which they can develop physics-based dynamic geometry visualizations. 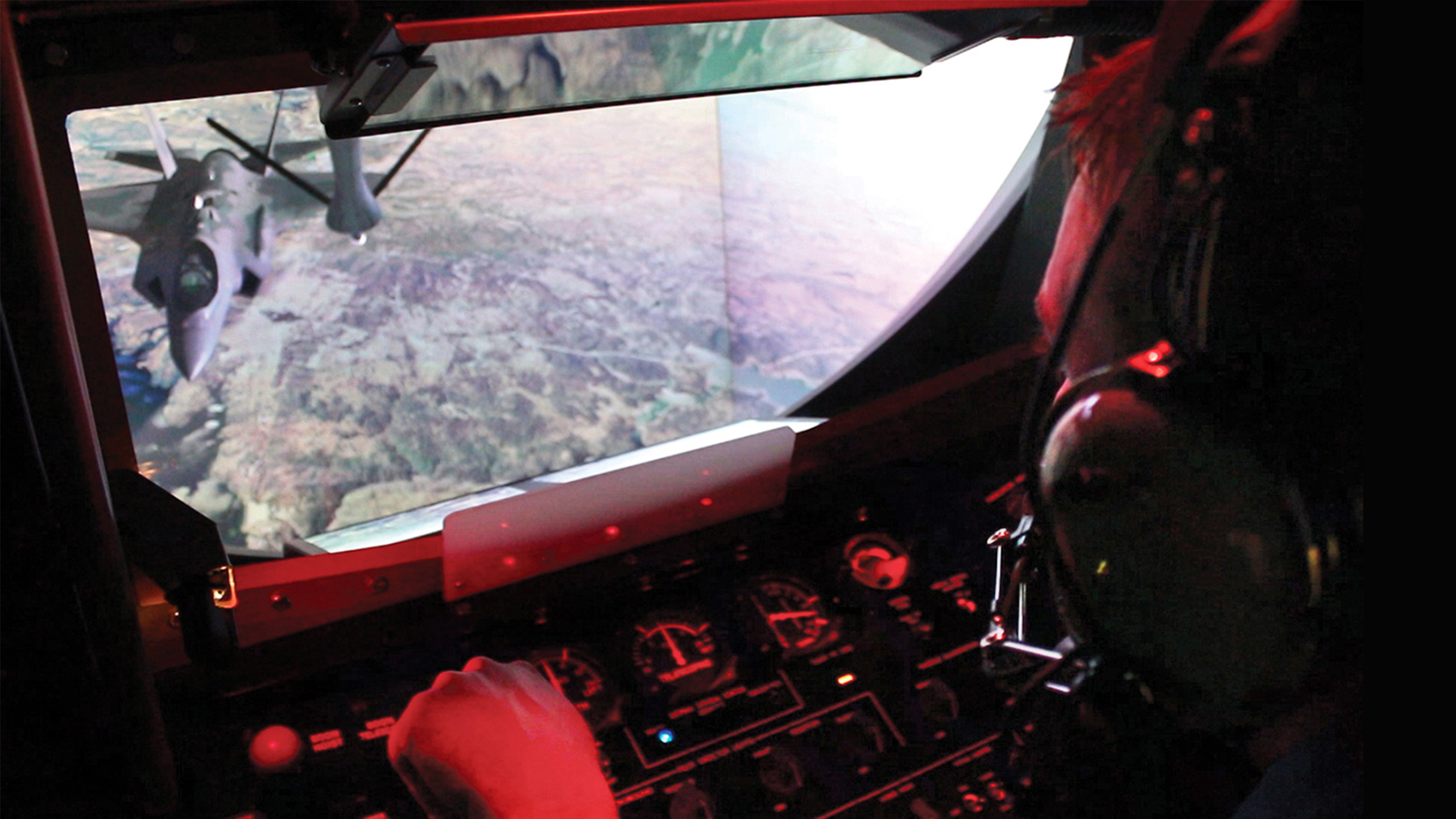