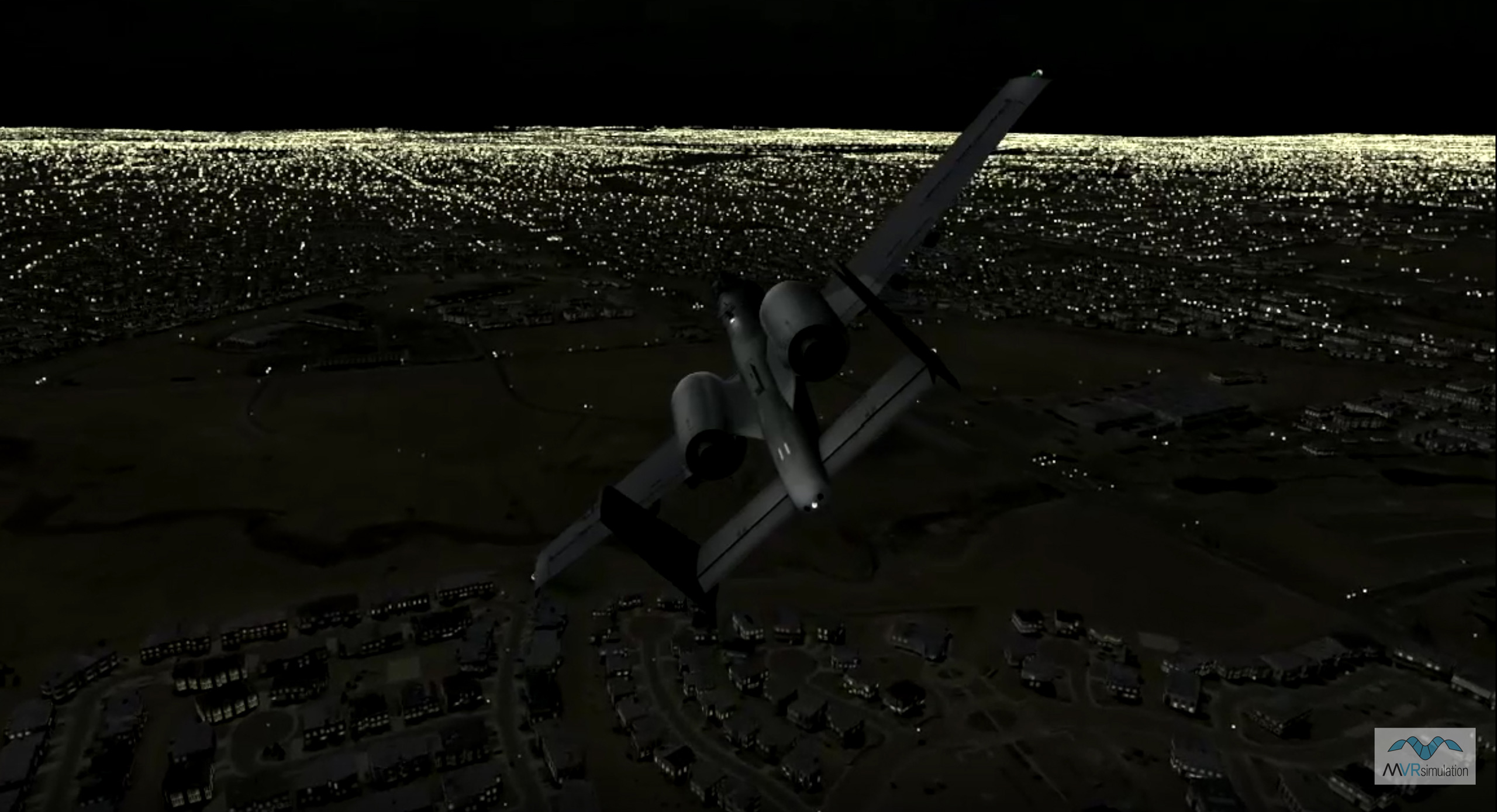 MVRsimulation VRSG real-time scene of an A-10 entity in flight over virtual Buckley Air Force Base and Greater Denver, featuring airfield lighting, and in the background, the cultural lighting of Denver. For simulating night scenes, the terrain contains thousands of cultural light points of Buckley AFB, Aurora, and Denver.

Light points are small self-luminous objects that do not cast illumination on the surrounding scene. They are generally used to model airfield lighting systems (such as VASI, PAPI, and taxiway lights). VRSG supports full-featured light points. Light point processing runs entirely in vertex shader programs downloaded to the graphics chipset, affording exceptional performance. You can expect as much as 20,000 omni-directional light points or 13,000 directional light points per frame at 60 HZ. VRSG light points were developed with input from subject matter experts, such as commercial and military pilots. 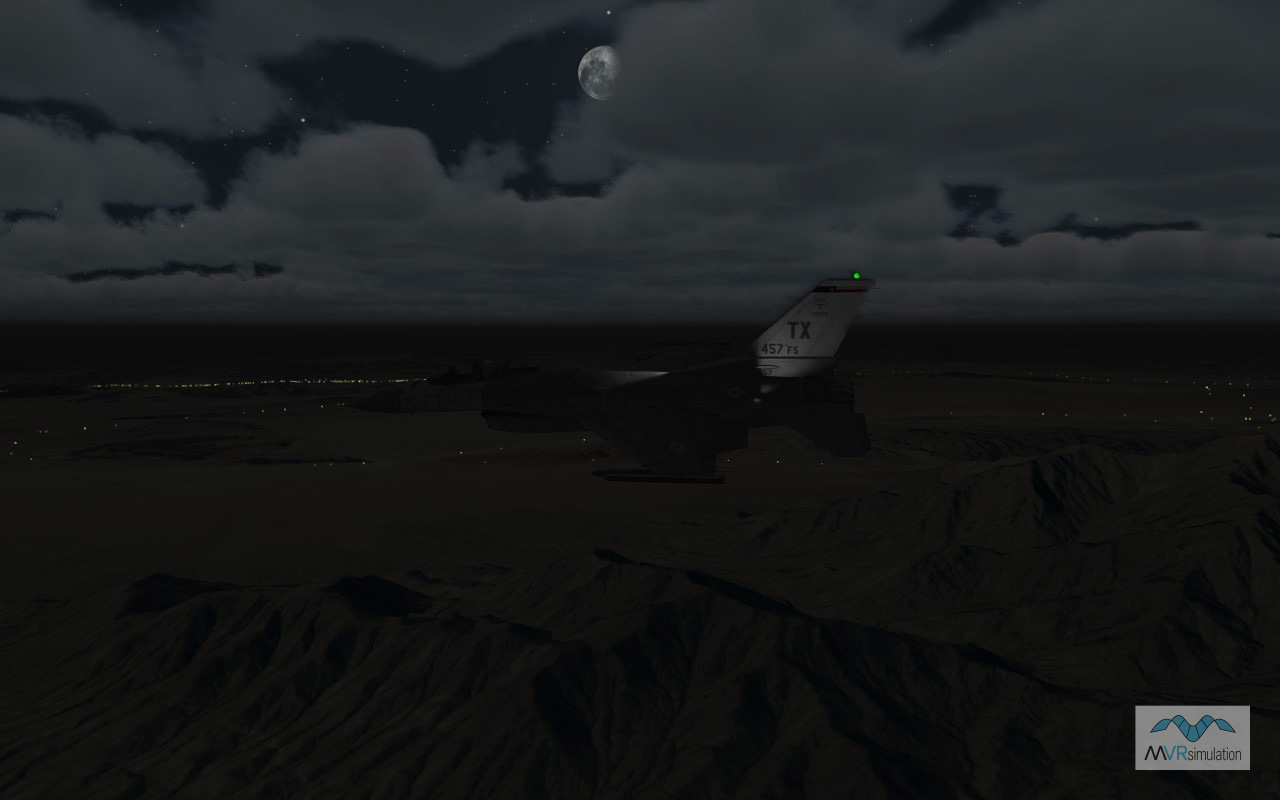 VRSG real-time night scene featuring use of a lightpoint for the green tail light on the tip of an F-16 entity.

Light lobes cast light, illuminating anything 3D in front of them (like vehicle headlights) or around them (like streetlights or searchlights).VRSG provides realistic light lobes that yield per-pixel radial attenuation and per-vertex axial attenuation. VRSG can render potentially thousands of lights. You can fully characterize the light lobe radial profile in two dimensions using a texture map. You can also add a light lobe externally to a model via a JSON file where you define the light point's location, size, and color and intensity of the light. VRSG light lobes do not require multiple database render passes or hardware that can store alpha information in the frame buffer. Instead, VRSG light lobes are rendered single-pass, which results in minimal performance degradation when enabling a light lobe. No drastic impact on fill rate or geometry processing penalties is incurred when enabling light lobes.

VRSG's dynamic lighting supports a model's light map, which can be used to make a model appear to have lit areas at night. For example, a light map can be added to a building model to make the windows look lit at night, or have the effect of a light mounted on the building that casts light onto the building. Normal maps can also be used to provide per-pixel perturbation of a polygon surface normal vector. Specular maps can be used to create reflective surfaces that reflect the sky. 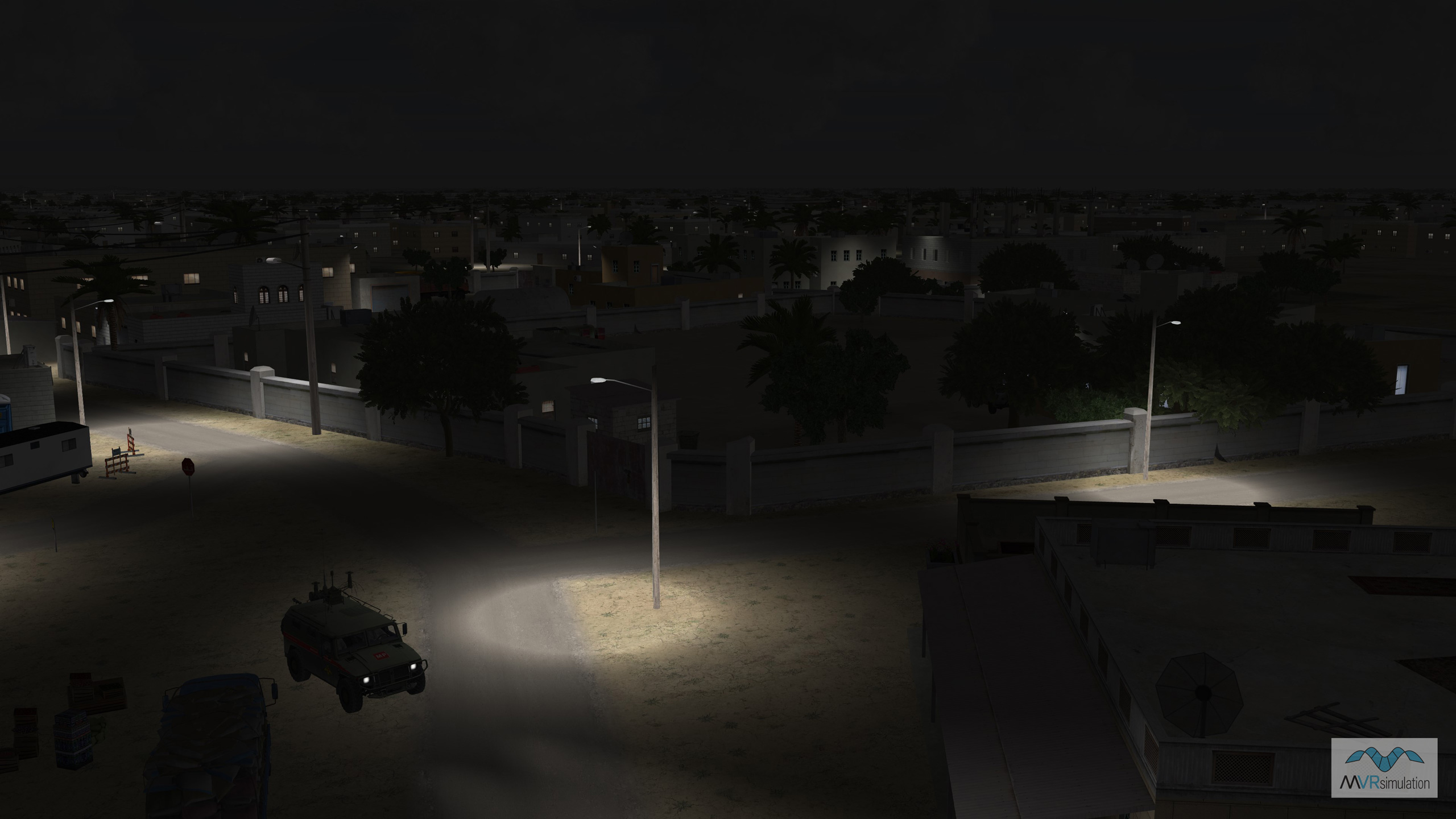